When Setting Becomes a Character.

Good heavens its been ages since I’ve posted. Been at it hard the opening 120 pages of Book 2. Apologies. So then. My wife and I have just returned from our yearly visit to Folkestone. It’s a tradition going back to 2003, when the world was a very different place. For me and for Folkestone. I’ve visited yearly with the exception of 2019 and 2020. Birth of our child and a pandemic. When September rolls around I feel the pangs of nostalgia and the want to travel to England. It’s home. In a sense.

If you’ve read Book 1 you understand Folkestone develops into an important setting from about half way. In Book 2 it grows in importance. Folkestone has a rich history. It was once an important place. It saw decline. As did many seaside towns England forgot to shut down. The Channel tunnel doomed Folkestone’s cross channel service and saw the town’s greatest period of rot. It wasn’t until 2010 I began to see change in the right direction Art colony. Suburb of London thanks to a high speed link. Restaurant haven. Folkestone came full circle. I was told back in 2003 by a local restauranteur and property owner Folkestone would soon become the new Brighton. It took nearly twenty years but it seems to have come to pass.

I don’t live in Folkestone. At times I wish I did. But. Well. The Costa Brava has better weather doesn’t it? Mediterranean temps. Sunshine. But Folkestone has its history. And the English Channel. And proper fish & chips. Plaice. Don’t get me started.

So we went. As we do. But this year in August and not September. And it felt like it always does when I first arrive outside The Clifton Hotel. The nostalgia. That feeling of familiarity. Memories. Of being a small part of a vast history. It was hot in England. I mean well hot. Hotter than the Costa Brava in August. That’s a change. And not a drop of rain. The poor Leas. So used to seeing its grass lush and green, not brown like the Santa Monica Mountains in summer.

We had our two and a half year old in tow again this year. It doesn’t diminish the experience. In fact, the little monkey makes each moment in Folkestone more precious still.

We registered in room 112 again. The hotel’s proper suite. I was a guest in this room for the first time in 2007. A seminal year for me and another passion of mine…painting miniatures. It’s how I discovered Folkestone. I began attending an international concorso held in the Leas Cliff Hall. Euro Militaire. Another story for another time. Room 112 holds my memories just as The Clifton Hotel and Folkestone does. Room 112 is timeless. When I entered this last week, the first thing I did was snap photos of the bedroom and private lounge. It occurred to me then the only real difference was my cheeky little chap wandering around the rooms.

So much remains the same after 15 years. The sofa, curtains, carpeting, mirror above the fireplace and even the table lamps are the same. Feels like coming home.

I created the montage of photos of the suite from the “then” of 2007 and the “now” of 2022. When comparing them side by side it is striking how little has changed in those fifteen years. The immediate change is — of course —a little boy who was not yet even a glimmer in my eye in 2007. In the history of the hotel, never mind Folkestone, fifteen years is but a moment. But in my own history to Folkestone, fifteen years is a significant passage of time. And yet, room 112 remains a bulwark against the passing of time. Nearly everything remains unchanged since 2007. The same curtains at the window. The same television armoire. Same framed prints. Mirror over the fireplace. The same sofa. Even the same table lamps. Albeit with different shades. Time stands in place in 112. The hotel updated the bedroom a bit, but still there are hints of 2007. The same beside tables and desk. Mirror and wall sconces painted silver from gold. It’s not a bad suite. English in every last way. Quaint. Lake Nanna’s house in Southwick, but still with hints a plenty of its former grandeur. The bedrooms are due the makeover which is meant to commence before the year is out. I find so many reasons to be happy here. 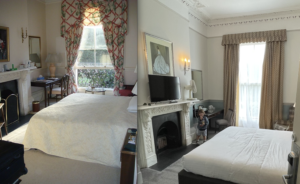 A good bit of updating — including my little boy, but still there is the same dressing table and chair.

It got me thinking. Fancy that.

Some years ago as I sat at my writing desk sorting out the plot twists for the trilogy, I decided to make Folkestone a focus of THE GIFT. Its importance in evidence. It gets a mention from nearly the start when I throw the reader a Red Herring. I lead you to believe Titanic is the point of confluence. In fact, as we learn later, all roads (and characters) lead to Folkestone.

With this in mind I began to consider something I had not initially given thought to. Is Folkestone in fact a support character itself? Can a setting be a character? It’s a legitimate question, not simply answered. From my point of view, Folkestone is a living entity. Its strengths and flaws as flesh and blood as any character in THE GIFT. When I walk the Edwardian era Leas or take a coffee on The Clifton Hotel’s terrace, I feel Folkestone’s spirit closely. It’s an immensely personal and emotional thing to me, and its spirit I hope I have captured in the trilogy.

I always miss Folkestone and The Clifton when I return to Spain. The blow is softened for the fact I’ll be back twice more before the year is done with me. Certainly I’ll be drawing comparisons for the sake of nostalgia again.

As always, may the road rise with you.