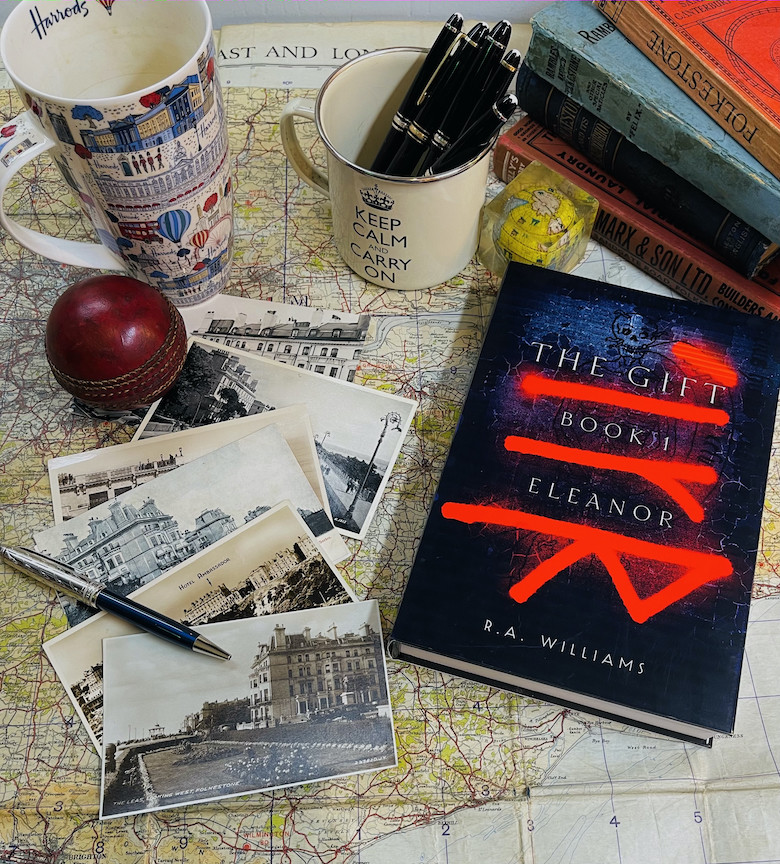 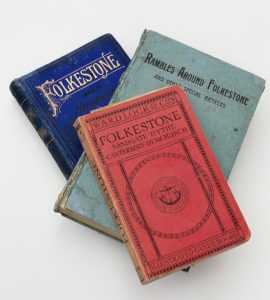 Here we are then, carrying on with my bits & bobs reveal.  I present to you a stack of manky old books. At first glance that would be an accurate description. But —

There it is again. But.

Finding old books on Folkestone are to the this author a true treasure when writing about a town a hundred years gone. I found these in an antiquarian bookshop in a delightful Victorian era townhouse in Folkestone. Marrin’s Bookshop, purveyors of antiquarian books, maps and prints. I really should make mention of this marvellous rare book seller. In every regard it fits the bill of a quintessential antiquarian. On Folkestone’s high street, the shop is room after room, packed to the rafters with fascination. Founded by George Marrin in 1946. He had been one of millions of soldiers in the Great War who embarked for France in Folkestone. He returned to Folkestone after WWII on doctor’s advice to seek fresh sea air. The shop’s legacy is continued to this day by George’s son Patrick. Highly recommend Marrin’s for anyone who loves rare books, or just a blood marvellous bookshop.

Right then, back to these manky old books. Within these yellowed pages bonking of  mildew are vivid tales of Folkestone in its Edwardian heyday, when the town was a destination for England’s  King and those who shagged  him.  Oh dear. Naughty but true. These books are a goldmine to an author doing research, offering in great detail Folkestone and its environs in an era now long gone.   Another of the books is a directory for the hotels and lodging houses, restaurants and dress shops doing trade in 1937. It includes telephone numbers an all. Dry reading admittedly, but the advertising is worth the price of admission. Still another title, Ramblings About Folkestone,  is a gorgeously detailed travels about the town end environs from 1891-1913. Each story originally appearing in the Folkestone Herald as a weekly column and offers a flavour of the period truly priceless to a researcher.

These next two books are slightly less manky. The JAWS Log by Carl Gottlieb was released in 1975, hot on the heels of the film. As a ten year old I read and reread this book until I could recite it in my sleep. No other film (Benchley’s book left an equal impression upon me) left more of an impression than JAWS. It’s the perfect monster story in three acts.

Act 1: A victim is taken by an unseen predator.

Act 2: We see only the dorsal.

Act 3: We get the head. The tail. The whole damn fish. 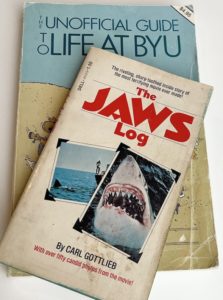 So uncomplicated. Yet so powerful. Carl Gottlieb, who also co-wrote the screenplay and played Meadows, a local newspaper journalist in the film, created The JAWS Log as an account of its making. I still read it now and again. If you’re a fan of the film this is a must have, purely for the urban legend, Gottleib never refuted, that the photo of the man being devoured was not a stunt for the film but in fact a photo of a crew member being attacked and later bled to death. The story goes a stunt double was swimming about waiting for his scene when a Tiger shark managed to make its way through all the support boats and electrical lines strewn through the water to attack the unsuspecting double. It’s rubbish. But when you are ten years old it surely must be true. 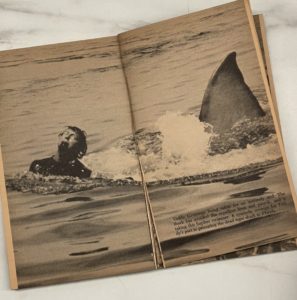 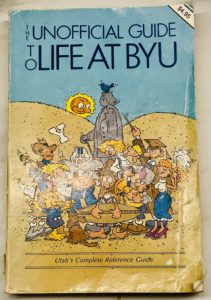 The next book, is even more esoteric. The Unofficial Guide to Life at BYU, published in 1986. If you were at BYU during those mad autumn days in 1986 you know what this guide is all about. Right, I admit it, I attended Brigham Young University. It was the 80’s. A different time. A different life. 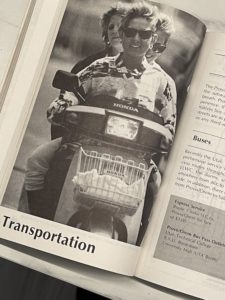 Still, my experiences there left an eternal impression upon me. From riding the chair lift at Sundance and realising you were sitting next to Robert Redford, to driving hell-for-leather around the Alpine Loop, to fabulous lunches in the Tree Room. And to climbing Mount Timpanogas or dancing at Plastique. All left deep impressions upon me. This book serves to remind me of those years when  we were giants and anything was possible.

God, it’s been a wonderer journey so far.

As always, may the road rise with you,